The City of Sydney’s lesbian, gay, bisexual, transgender and intersex (LGBTI) community is the largest and most vital LGBTI community in Australia. It is a resilient and vibrant community that has made substantial gains over the past four decades - homosexual law reform and anti-discrimination laws, action on anti-gay violence and legal recognition of same-sex relationships.

Wednesday 15 November, 2017, was a historic day for Australia’s LGBTI community.

Of those who participated in the federal government’s postal survey, 61.6% said yes to marriage equality (and 83.7% of Sydneysiders). While our LGBTI community should not have had to go through this harmful process to get this result, we are one step closer to ending discrimination through marriage inequality.

We still have a way to go – we need to lobby our MPs to move quickly and enact the will of the people. We want marriage equality by the end of November, 2017.

Many LGBTI people still face discrimination in the workplace, at school and in some families. Currently, LGBTI Australians are six times more likely to take their own lives than other Australians – this statistic is unacceptable.

For more than 30 years, Clover Moore has worked with LGBTI communities to fight for equality and to challenge the inaction of the major parties. She was the first Councillor to publicly support the Sydney Gay and Lesbian Mardi Gras in the 1980s and the first Member of the Legislative Assembly to march in the Parade in 1992.

Clover’s 1993 Homosexual Anti-Vilification Bill became law and made it illegal to incite hatred of gay men and lesbians. Her 1997 Significant Personal Relationships Bill was blocked in NSW, but became the model for Tasmanian and Victorian laws. Her same-sex adoption reform in 2000 gained no support in Parliament, but she finally got majority support for it through a conscience vote in 2010.

Every year during Mardi Gras we fly the Rainbow Flag over Town Hall. It joins the 200 rainbow banners flown along Oxford and Flinders Street since 2005 and the giant Rainbow Flag at Taylor Square. These symbols help to make clear that Sydney is an inclusive, welcoming, LGBTI-friendly city and that we are proud supporters of our LGBTI community.

The City is a major sponsor of Mardi Gras and provides leadership on LGBTI issues by supporting community organisations and safety programs, particularly via our grants program and through our LGBTQI Community Programs Officer.

On 29 August 2017, the City of Sydney Council unanimously voted to support the ‘yes’ campaign for marriage equality during the federal government’s postal survey.

This support included a mail out to the community to encourage a ‘yes’ vote and more than 260 rainbow and ‘Vote Yes’ banners flown throughout the City of Sydney. Sydney Town Hall was lit up in pink during the campaign and the rainbow flag erected.

Council also agreed to extend its accommodation grant to Australian Marriage Equality for the use of the Equality Shop at 122 Oxford Street in Darlinghurst as well as the use of vacant kiosks and other available venues throughout Sydney. Several events in support of the yes campaign were held in City of Sydney parks, including Australian Marriage Equality’s Official Survey Results Picnic in Prince Alfred Park on 15 November. ‘It’s a Yes’ banners were erected in the front of Sydney Town Hall on the same day. 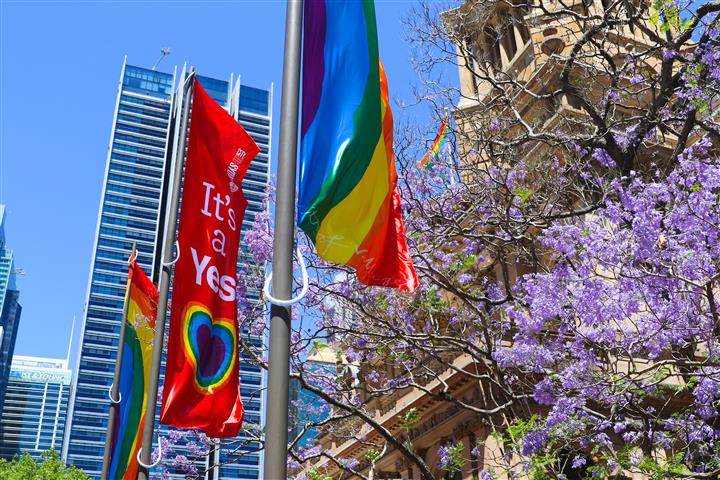 The City of Sydney will be working with the Sydney Registry of Births, Deaths and Marriages to hold a mass same-sex wedding in Sydney Town Hall as soon as practicable after amendments to the Marriage Act become law and will also waive venue hire in City of Sydney halls and parks for a period of 100 days.

This is a small gesture of goodwill in the spirit of celebration.

Resources to support Sydney's LGBTI community have been collected on the City of Sydney website.