Councillor Miller had an excellent opinion piece published in today's Daily Telegraph, countering some statements this week from Liberal Councillor Christine Forster. Councillor Forster thinks it's a waste that the City opposes WestConnex and penned an opinion piece under the title, "Clover Still Fighting a Losing Battle on WestConnex". Of course I'm still fighting. Read Councillor Miller's piece below for an idea why, then join us in the fight here: clovermoore.com.au/westconnex 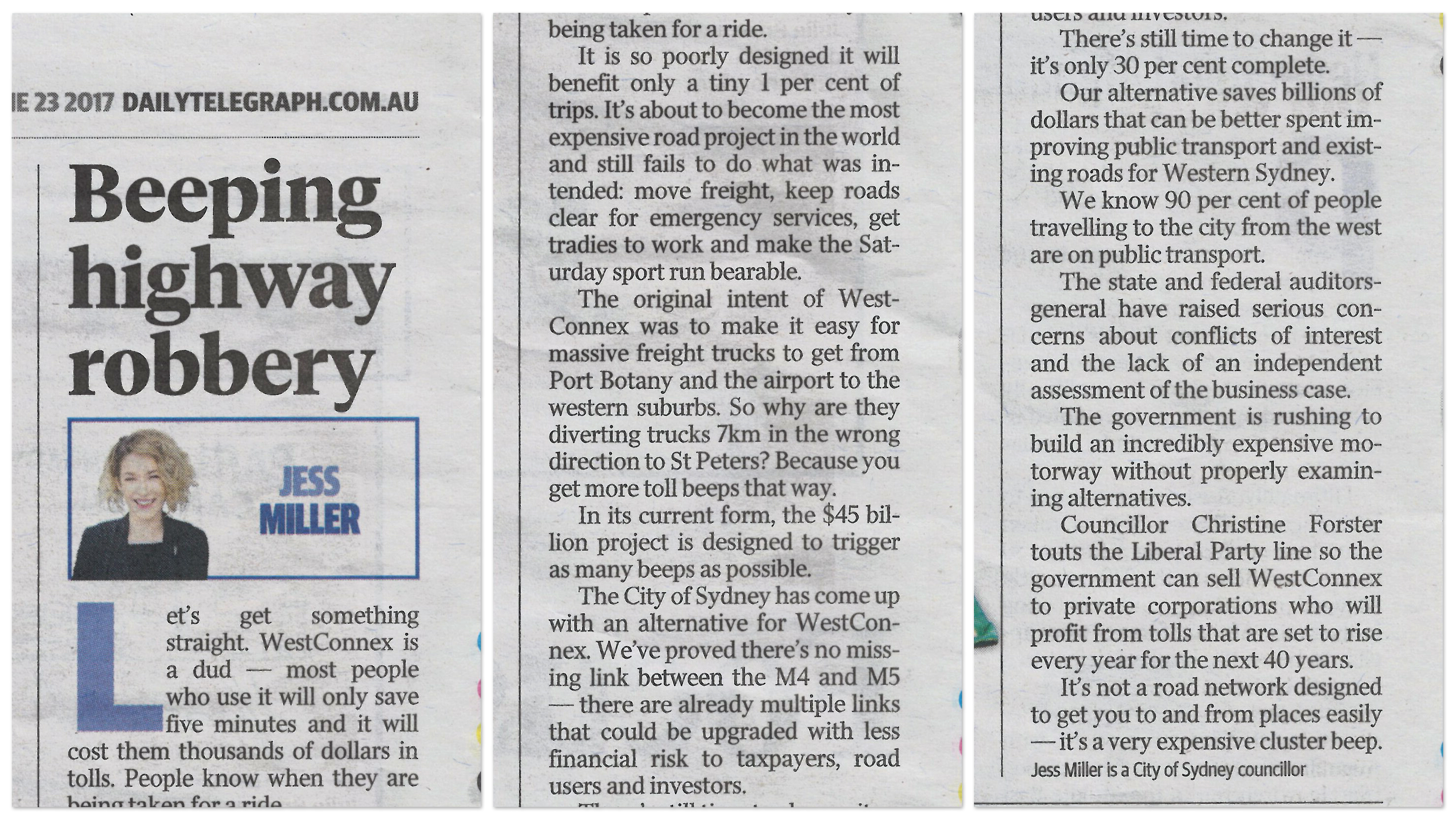 Let's get something straight. WestConnex is a dud - most people who use it will only save five minutes and it will cost them thousands of dollars in tolls. People know when they are being taken for a ride.

It is so poorly designed it will benefit only a tiny 1 per cent of trips. It's about to become the most expensive road project in the world and still fails to do what was intended: move freight, keep roads clear for emergency services, get tradies to work and make the Saturday sport run bearable.

The original intent of WestConnex was to make it easy for massive freight trucks to get from Port Botany and the airport to the western suburbs. So why are they diverting trucks 7km in the wrong direction to St Peters? Because you get more toll beeps that way.

In its current form, the $45 billion project is designed to trigger as many beeps as possible.

The City of Sydney has come up with an alternative for WestConnex. We've proved there's no missing link between the M4 and M5 - there are already multiple links that could be upgraded with less financial risk to taxpayers, road users and investors.

There's still time to change it it's only 30 per cent complete.

Our alternative saves billions of dollars that can be better spent improving public transport and existing roads for Western Sydney.

We know 90 per cent of people travelling to the city from the west are on public transport.

The state and federal auditorsgeneral have raised serious concerns about conflicts of interest and the lack of an independent assessment of the business case.

The government is rushing to build an incredibly expensive motorway without properly examining alternatives.

Councillor Christine Forster touts the Liberal Party line so the government can sell WestConnex to private corporations who will profit from tolls that are set to rise every year for the next 40 years.

It's not a road network designed to get you to and from places easily - it's a very expensive cluster beep.

Jess Miller is a City of Sydney councillor