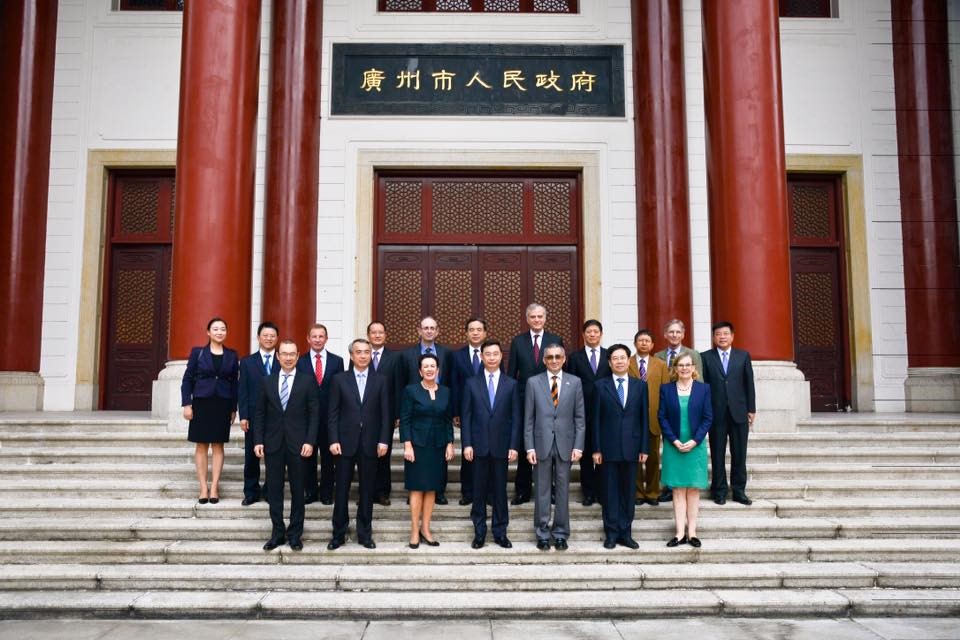 Last month I led a 100-person delegation to China that included businesses travelling with the Australia China Business Council, the Sydney Symphony Orchestra, and representatives from the University of Sydney, UTS: University of Technology Sydney and 4A Centre for Contemporary Asian Art.

We travelled to celebrate the 30th anniversary of our Sister City relationship with Guangzhou. It was the largest international delegation – in size and scope – the City has led to promote Sydney overseas.

Guangzhou is a city of over 13 million people, in a province of 110 million. We have close historic ties and many of our international students, visitors and business partners come from southern China.

Our events in Guangzhou – a business summit, sustainability forum, alumni reunion, Sydney Symphony concert and art exhibition – were all great successes. They not only provided opportunities to celebrate our longstanding economic, cultural, university and civic connections with Guangzhou but strengthen them as well.

Read more about it here or follow on below. 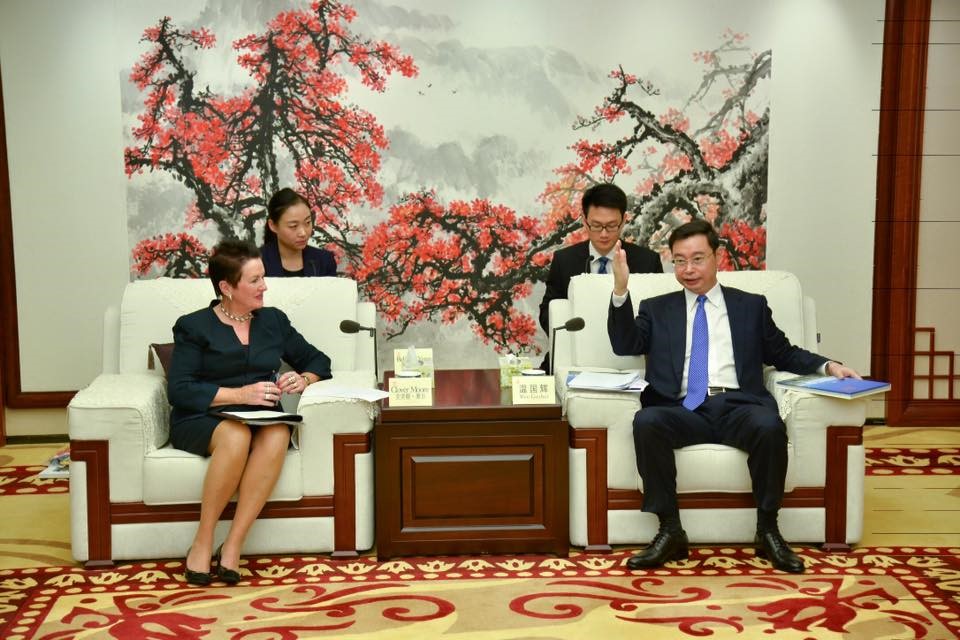 Our first official stop on arriving in Guangzhou was a courtesy call with Mayor Wen Guohui at the Guangzhou Government City Hall. Mayor Wen extended formal thanks for our support for Guangzhou week in Sydney earlier this month and spoke at length about how fruitful our two cities’ robust relationship has been.

He was keenly interested in the work we are doing on environmental sustainability and urban planning and grateful for our support of Australian businesses in China. He was also pleased to see representatives from our Sydney universities, remarking on the strength of our higher education sector.

On top of Guangzhou’s generosity through our Chinese New Year celebrations (they sent a delegation of performers and the magnificent goat lantern was located in the heart of Chinatown this year), to celebrate our 30th anniversary Guangzhou presented Sydney with an extensive encyclopedia collection on the history of their city. Mayor Wen also gave me a picture of 2016 Guangzhou city, saying the encyclopedia was a celebration of their past and the new image a celebration of the present.

In return, we presented Guangzhou with a series of Bruce Goold linocuts – a kookaburra, a cockatoo, a magpie and a lyrebird – the original set of which are displayed in Town Hall. Bruce took as his inspiration the native flowers in the beautiful stained glass windows in Town Hall and the panels of etched glass that feature native Australian birds and flora. Each bird can be seen in the native habitat of Sydney and is distinctive for its bird song.

During the week I made other courtesy calls with government officials, including former Guangzhou Mayor Chen Jianhua, who is now the Chairman of the Standing Committee of the Guangzhou People's Congress. In 2008 when I visited Guangzhou last, Chairman Chen and I committed the Guangzhou in Sydney 30th celebration promotion and then our Sydney week in Guangzhou. 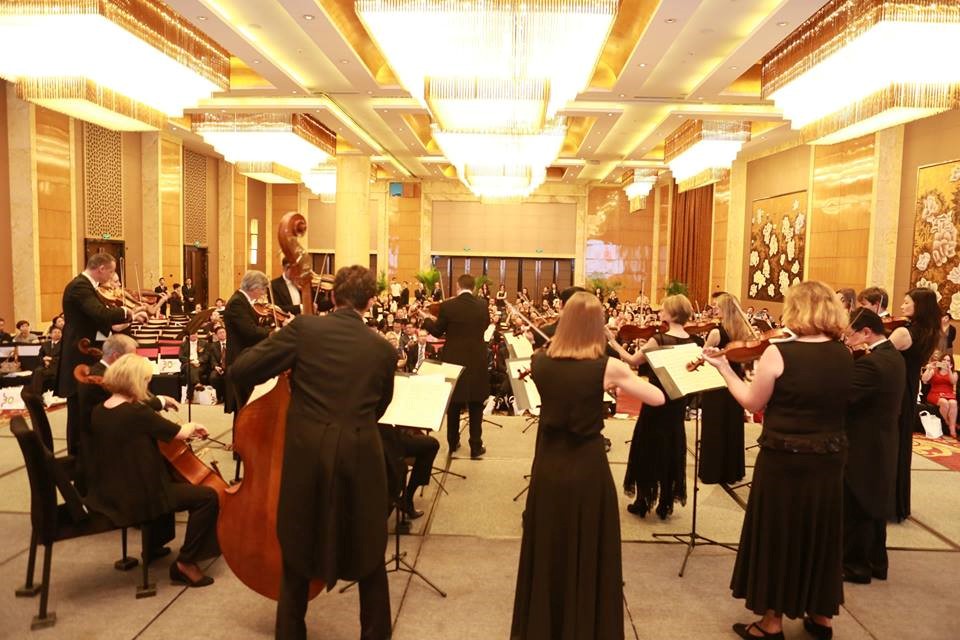 Sydney Symphony play us in

We launched our three-day program with a Sydney Symphony Orchestra concert for participating delegates and local dignitaries. It was a special performance that included Bach concertos, Tchaikovsky’s Serenade for Strings with Scullthorpe and a Chinese melody to conclude.

The SSO is an integral part of our cultural fabric and a leading cultural ambassador for Sydney and Australia internationally – so I was really proud to have them as part of our delegation.

Not only are the musicians renowned performers, the orchestra also has a fantastic outreach program with young Guangzhou musicians, in collaboration with the Xinghai Conservatory of Music. 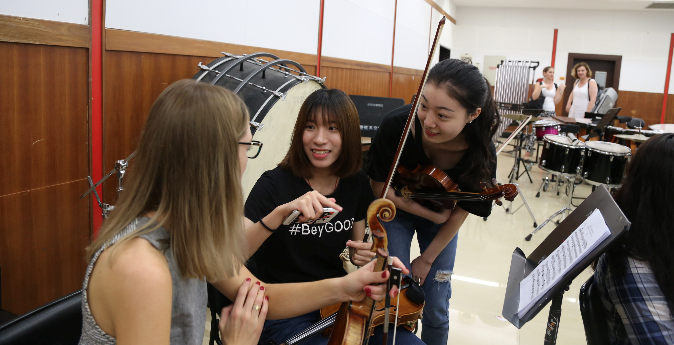 This cross-cultural exchange is so valuable, not just for our relationship with Guangzhou, but also for the performers themselves. Take Shuti Huang for instance – an SSO violinist who studied at the Shanghai Conservatorium nearly forty years ago. He says he remembers visiting artists bringing a different perspective to the understanding of music, and that he still remembers the new ideas feeling like a breath of fresh of air.

And Rory Jeffes, the SSO’s Managing Director, put it well at the opening concert when he said that: "Music is a universal language that can create friendship between people and nations." The power of music to compel and lay deep seeds of an emotional connection is almost unparalleled.

In celebrating and strengthening this wonderful relationship, we could not look past the SSO as a key part of our delegation – alongside our business and educational representatives.

Read more about the exchange here. 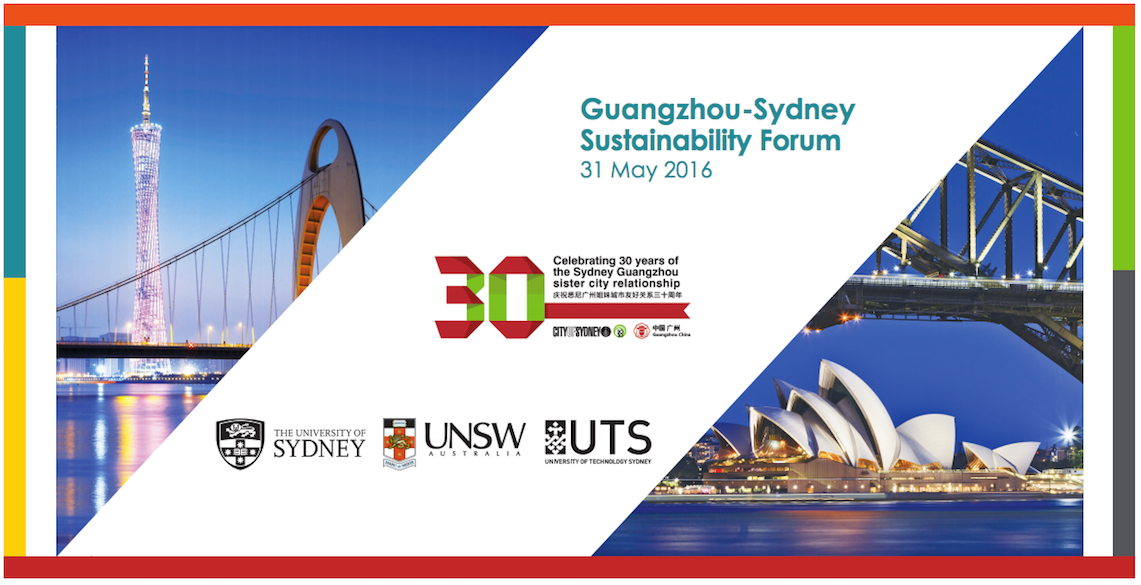 These world-leading educational institutions are not only great ambassadors for Sydney, their ground-breaking research and industry engagement in the fields of sustainability and green technology made them another important part of our delegation – as we took the opportunity this milestone presented to share ideas that will help us build the environmentally sustainable cities that our planet needs.

Our university partners developed a program that featured their leading researchers on sustainability in the areas of water, energy and infrastructure. Local experts in renewable energy and green tech as well as policy makers, government officials and other university academics all took part. Discussion was a two-way exchange, with our experts learning about the innovative research being carried out by Chinese colleagues.

Dangerous climate change is the great challenge of our time. This forum demonstrated the idea that underpins our relationships with other cities: When we work together toward a common goal, and use our relationships to get the right people in the room together, solutions can be found.

Over the past 10 years, NSW has attracted one-third of Australia’s 500,000 international students and the majority of them based in Sydney – one third of those are from China. Walking around the event I was glad to hear that Sydney not only provided an outstanding tertiary education but a happy and fulfilling experience for these graduates.

Professor Yu Jianshe, Secretary of Guangzhou University Party Committee, thanked us for having such a high regard and level of care for Chinese international students. We take looking after international students – from my Lord Mayor’s Welcome reception at the start of each semester, to our student ambassador program that helps get vital information to students – seriously at the City and I’m glad to see so many having such a positive experience in Sydney.

Studying in Sydney is the starting point for a lifelong connection with our city for many of these alumni, who have gone on to help foster our bilateral relationship as well as connections in the business and education sectors and the community.

On my way to deliver the talk to students at Guangzhou University, I asked if we could take the light rail. It has four carriages, is about 37 metres long and has a capacity for 380 people. During peak hour, more carriages are clicked on to the back, and 15,000 people per hour can use the service. 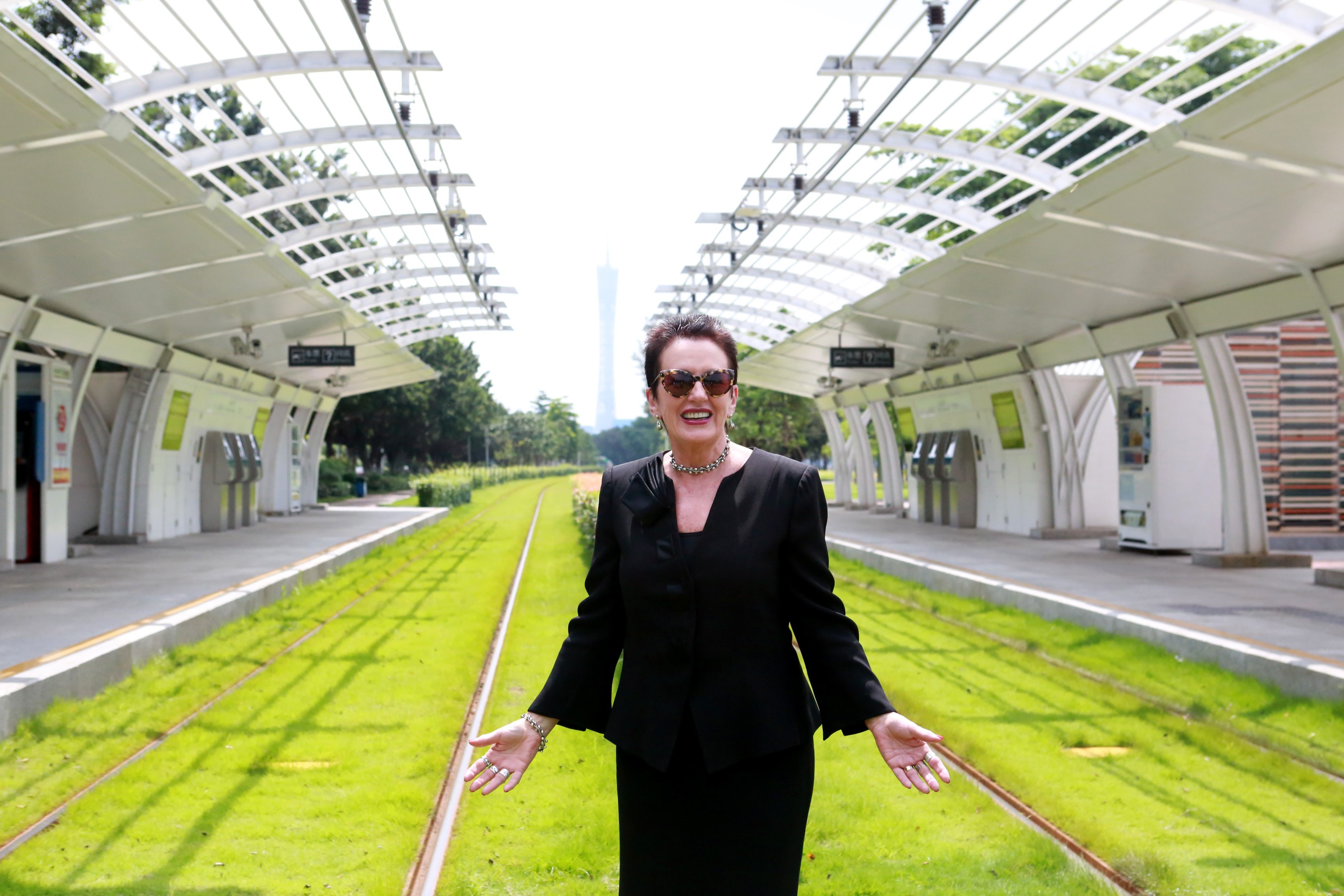 It's run on batteries that are stored on top of the tram carriages and charged at each stop, which means there are no overhead wires. They're removable batteries, so they can be replaced as technology improves.

It's quiet and flexible to suit commuter needs. And look at the beautifully grassed track! I will continue to push for a similar approach for the CBD and City South light rail, especially in Surry Hills.

Getting down to business

Alex Sala was part of the business delegation that travelled with us to China for our Business Summit. She is the business manager of Global Experience Australia, a Sydney company that organises home-stays for Chinese students.

She joined 30 other Sydney-based businesses (and 180 Chinese companies) at our Business Summit, which was organised by our partner the Australia China Business Council. 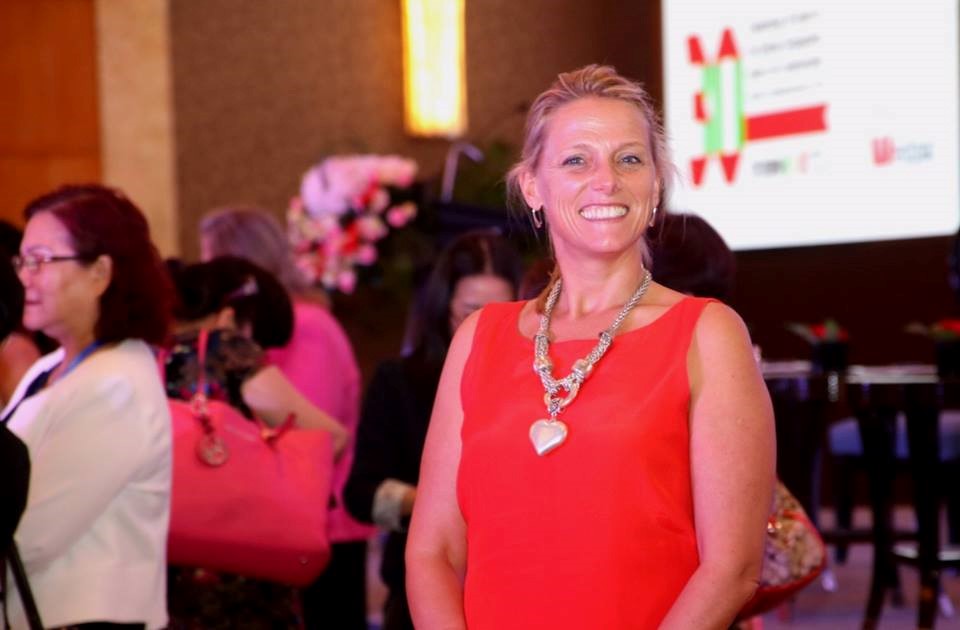 She told me that she joined the delegation so she would have an opportunity to network and continue her business relationship ("guanxi") with China. But she also said she and her team came to Guangzhou to share their expertise and help educate agencies who send international students to Australia. "What they can expect, for peace of mind of everyone involved."

It was great to see the room paying great attention as our visiting experts talked about Australian markets. It was even better to see the room buzz during the business matching session, and I'm told many of our businesses have seen direct results already.

Leveraging the Sydney-Guangzhou milestone to help get some Sydney businesses over to China, and to host this summit, gave us the opportunity to help forge strong people-to-people relationships – which are at the heart of business and cultural ties – between our two cities. 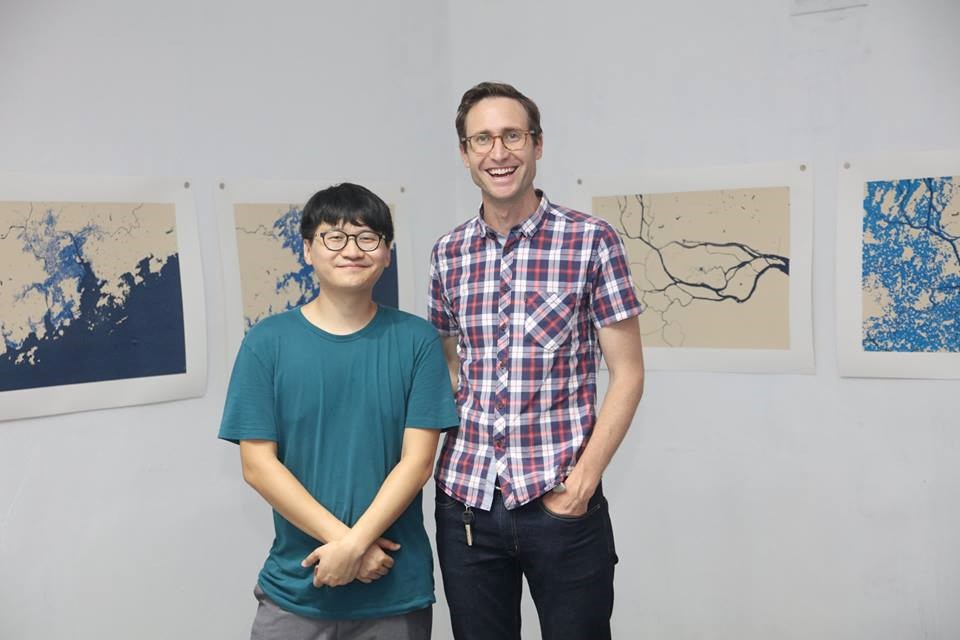 Lucas' work maps predicted sea level rise through the Pearl Delta on beautiful screen prints, made in collaboration with a local printmaker. His work considers how the populated river-bank will adapt to our changing future. It's traumatic because the land along the bank is so low and 1-5m rises will be devastating.

Trevor is really inventive. He has rigged a humidifier to collect water that will be brought to Sydney to fuel humidifiers back at the 4A Gallery!

You'll be able to see these works at there in July.

Our hosts suggested we visit the headquarters of WeChat, due to our keen interest in innovation and facilitating tech growth. WeChat is a messaging service used by 700 million people – so they're obviously doing something right! It started as an app to help friends chat, but is now used for all sorts of things, like checking traffic or booking appointments. 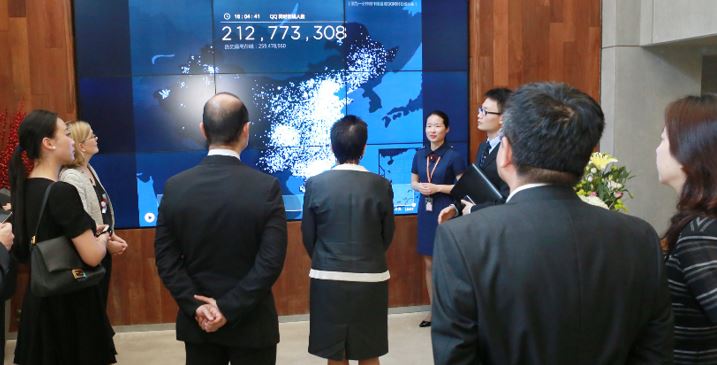 WeChat's offices are in a former textile factory precinct that was built in the 1950s. The government bought the factory and converted the precinct into a hub for creative and tech industries about ten years ago. Some of the equipment and heavy plant remains as a reminder of its industrial past which now houses multiple tech firms as well as shops, bars and retailers.

When we consulted for our tech ecosystem, we were told the most powerful thing the City can do is make it easy for tech and creative firms to cluster – to work with and bounce off each other in “cool” spaces. It’s exactly what should be happening at Australian Technology Park (also an old, converted industrial space). I hope the NSW Government considers the success of precincts like the Guangzhou Textile Park as it finalises plans for the Bays Precinct and Central to Eveleigh. 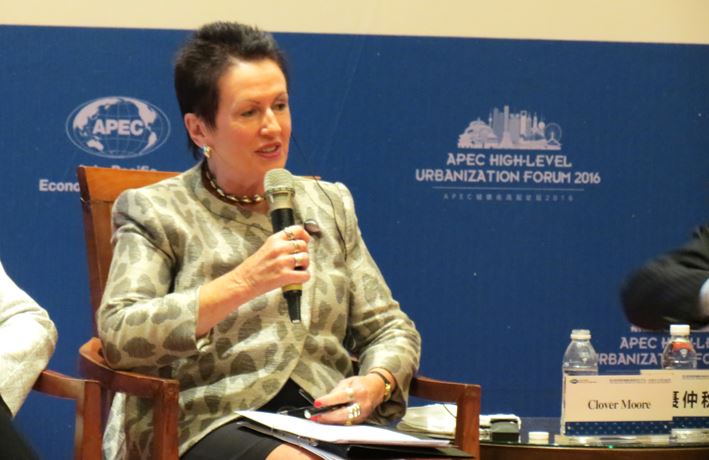 Following our time in Guangzhou, I travelled east to Ningbo, where I addressed the APEC High Level Urbanisation Forum.

To be asked to outline the City’s approach to urban regeneration and renewal is an endorsement of our response to the demands of increasing urban density while maintaining a liveable, sustainable city.

I discussed our focus on well-designed, sustainable development on former industrial sites that are supported by appropriate public amenity. I joined a panel session with the Chinese Vice Minister of Housing and Urban-Rural Development, the Deputy Assistant Secretary of the US Department of Housing and Urban Development and representatives from the Singaporese Ministry of National Development as well as the mayors of Ningbo and Xi’an and a representative from Tokyo.

It was inspiring to hear global support for our work as best practice: planning for and factoring in environmental sustainability while providing good community infrastructure which is essential for modern cities.

Density will only work when it is supported by open space, community facilities and a healthy social mix – and that is the challenge we all face.

You can read my speech here. 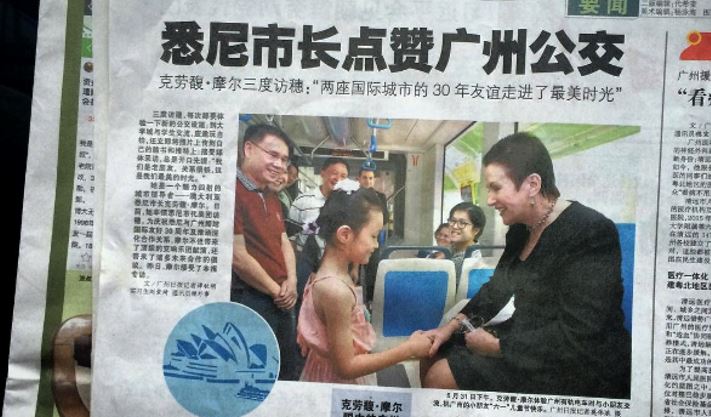 As we readied to depart China, look at what I opened up to in the Guangzhou Daily – a big spread of all we’d achieved through the week

This was our biggest international delegation yet, and it was a huge success. A sustainability forum, a business summit, engagement with universities and cultural exchanges – our relationship with Guangzhou was formalised thirty years ago and it’s stronger than ever.