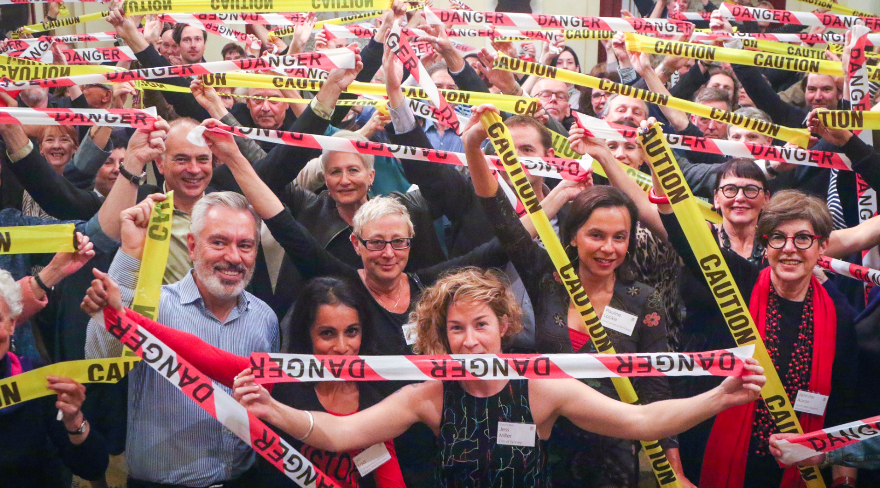 Below is the text of a speech I made at a WestConnex community reception we held at Town Hall, to bring together the various community groups campaigning against this disastrous road project.

Thank you all for coming, you are from many of the community groups working to protect Sydney, your homes and neighbourhoods from the destructive WestConnex Toll Motorway.

Of all the destructive projects PM Abbott, and Premier’s O’Farrell and Baird have visited upon our city – WestConnex is the worst and it’s supported by the Labor Party, Federal and State!

Since the current project was first announced in 2012 there have been constant changes. It began as a tunnel for trucks to get from Western Sydney to the Airport and to the port at Botany, Australia’s second biggest container terminal.

But in the last five years, it has morphed into a massive tolled commuter motorway, designs have been scrapped, extra lanes and tunnels added, major intersections moved and removed, tolls introduced, construction sites proposed and abandoned and we still don’t have a detailed final design of the whole project.

What is clear is that the current design doesn’t serve its original purpose and now proposes to deliver trucks to St Peters interchange, seven kilometres from Port Botany – as well as 61,000 vehicles through city residential neighbourhoods to the CBD the nation’s most critical global centre. It will also cause major gridlock on the Anzac and Harbour Bridges.

The whole premise of the government’s current argument – that WestConnex will reduce congestion for people in Western Sydney is a lie – their own business case shows that it will only save most users a miserable five minutes, and that catching public transport will remain a faster way to get to Sydney’s CBD.

The people of the west are being dudded, irresponsibly deceived and the city will be trashed. And people in Western Sydney will pay for the cost of the project with a range of new tolls.

For the first time, it’s not just the WestConnex tunnels that will be tolled, existing free public roads will also be tolled. And the tolls are guaranteed to rise 4 per cent every year.

The government is ignoring Sydney transport future needs and is building a motorway solely designed to raise the most money it can from private car paying tolls.

The government is condemning Sydneysiders to a future of worsening congestion and tolls.

It is shameful that at a time of accelerating climate change the State Government is ploughing public and private funding available for transport in Sydney on a road project as fundamentally flawed and expensive as WestConnex, when an overwhelming 89% of commuters from Western Sydney come to the City on overcrowded public transport – what they need is more frequent and reliable public transport.

WestConnex is the most expensive road project in the world. The cost has grown from 10 billion, to 12 billion, then 15 billion and now to 17 billion dollars. And it will keep rising - Dennis Cliché, the CEO of the Sydney Motorway Corporation, recently said ‘mega projects are mega difficult to deliver on time and on budget.’

In fact the City recently identified $28.5 billion worth of extra costs attached to the project, bringing the total cost to a staggering $45.3 billion.

That’s because every extension of WestConnex, every exit and every entrance generates hundreds of millions of dollars of publicly funded road upgrades required to funnel traffic to the toll way, and to take traffic from it.

WestConnex is an outrageous abuse of public money and process, and illustrates how major political parties in Australia currently do politics and projects.

During the 2013 Federal election, both the Liberal and Labor leaders promised $1.5 billion dollars to kick start the project despite the fact that Infrastructure Australia had put it in its lowest priority category and no business case had been prepared.

It is the sole survivor of three controversial road projects that PM Abbott supported in his first Budget. None had been originally ticked off by Infrastructure Australia.

Despite promising that he’d make the Infrastructure Australia Board independent of Government, when he became Prime Minister, Abbott sacked most of the people on the Board and made a former Liberal Party Minister the Chair. (Mark Birrell, former Victorian Cabinet Minister in Sep 2014).

The new Infrastructure Australia re-rated all three of Abbott’s toll roads as high priorities. The other two toll roads, Melbourne’s East West Link and the Perth Freight Link have since been axed but we’ve been left with WestConnex.

In 2014, Abbott gave WestConnex a $2 billion loan on very favourable terms well below market rates. And the Federal Infrastructure Agency shovelled money at the project whether milestones were met or not.

In the last few years, both the State and Federal Auditor Generals have raised serious concerns about conflicts of interest and a lack of an independent assessment of the business case for WestConnex.

So what has the NSW Government done? They’ve made WestConnex into a private company - beyond the scrutiny of Parliament, the Auditor General, ICAC or the public.

It is why your work shining a light on this shocking project is so important.

I am a veteran campaigner and I know it can be time consuming, soul destroying, and depressing, and yet we have no choice! We can’t let them get away with trashing our city neighbourhoods and using up essential future public transport funds. And so it is important to say to you - take time to celebrate the wins and spend time with your family so you stay energised.

So tonight is about bringing you together to draw strength from each other, so that we all go back with renewed commitment and energy to fight and stop this most destructive proposal.

It is heartbreaking to witness our beautiful parklands and suburbs under attack, to see trees cut down, homes bulldozed. The government adds insult to injury ensuring destruction happens before it is needed.

But you are causing concern and alarm to the government! So be encouraged.

City staff were recently told at a meeting with RMS that they had started work on new plans for Euston Road because of the reaction on the ground from residents.

So keep it up! You are having an impact! And there is time to stop the worst parts of this project.

The City will soon release our alternatives report. We’ve done a lot of work and spoken to numerous traffic engineers. Some of them are working on the project and spoke to us confidentially because they know what a flawed project it is and want it changed.

We’ve identified a better way to connect the M4 and M5 and a better and more direct way to get trucks to the airport and Port Botany.

Our plan makes clear that there is no need for the St Peters Interchange or Stage 3. Our plan will save billions of dollars which can be better re-invested on public transport in western Sydney, reduces the need for tolls and reduces traffic on local roads.

But a week after we presented the plan to government, they rushed out the design for Stage 3 before it was ready to be released and we know that because it’s been widely derided for its lack of detail, they announced Stage 4 and inadvertently confirmed our cost projections in the process, and announced they’re selling off 51 per cent of the Sydney Motor Corporation.

They are rattled. And I am more determined than ever to keep fighting this project and I hope that you will continue to stand with us and to fight it too.

Please know that your contribution counts. Supporting your partner, driving people to rallies, putting out a press release; it all matters, it all adds up and you should all applaud yourselves.

Can I please have hands up from people from:

Thank you to all of you for your wonderful work.

It is not over.

This is not a done deal.

We will win this.

This is not a done deal!